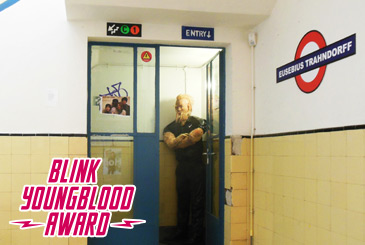 Underground Fog and a Panting Dog

Charlotte van Winden just graduated fine arts at the Royal Academy of Arts in The Hague where she presented her installation Underground Fog and a Panting Dog. It is a Gesamtkunstwerk in the form of a staged subway station which was influenced by Richard Wagners Das Kunstwerk der Zukunft (1849) and the way different disciplines reinforce each other. ‘Underground fog and a panting dog’ shows a glimpse of society where fiction presents itself as reality in an absurdist way.

“I make use of the three elements; image, sound and movement, in a three-dimensional installation consisting of sculptures (human figures and a dog), sound, and a staged video with hundreds of passengers waiting on a subway platform. My obsession with human behavior is one of the main inspirations for my work. I created every single passenger and sculpture, and the models on the subway ads using my own body as the raw material, with the aim of playing with similarities and differences. Choosing a central role for my personal defects in this process, I try to materialize the tension between familiarity and estrangement. The focus of my work is on the creation rather than on the credibility of the characters or of the selected places such as a subway station. The staged or ‘clumsy’ factor is important to me, it offers a way to step out of reality. My installations may be seen as an attraction, but in contrast to Disney, there isn’t any happy ending, and little sensation. Instead of comfort, I offer discomfort. Instead of entertainment I prefer tragedies.”